Doadrick Leumaerts
Human, Agent, Blindeyes
Deploy: If you control an Agent, gain Zeal.
Order (Ranged): Draw a card, then move a card from your hand to the bottom of your deck.
Cooldown: 1.

Deploy: Trigger this ability when played.
Zeal: An Order ability can be used on the same turn the card is placed on the battlefield.
Order: An ability triggered manually by the player. Cards with Order cannot be used for 1 turn after being placed on the battlefield.
Ranged: This ability can only be used while on the ranged row.
Cooldown: The number of turns before an Order or Fee ability can be reused.
Audio
The emperor has high expectations for you. See that you do not disappoint him. Hael Ker'zaer!
Export
Game version 10.5.0
2019-06-28 3.0.0 2021-08-03 9.2.0 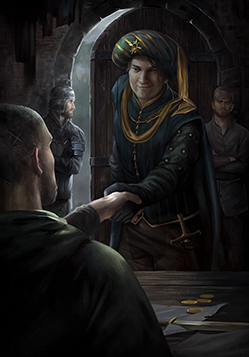