Deploy: Trigger this ability when played.
Zeal: An Order ability can be used on the same turn the card is placed on the battlefield.
Order: An ability triggered manually by the player. Cards with Order cannot be used for 1 turn after being placed on the battlefield.
Doomed: Status that removes the card from the game after it leaves the battlefield.
Lock: Status that disables a unit's abilities.
Poison: Status - if a unit receives two instances of Poison, destroy it.
Cooldown: The number of turns before an Order or Fee ability can be reused.
Audio
It's said that Vincent Van Moorlehem fears only one man. It's not Emhyr var Emreis or Geralt of Rivia - it’s his own son.
Export
Game version 10.5.0
2019-12-09 5.0.0 2022-02-08 10.2.0 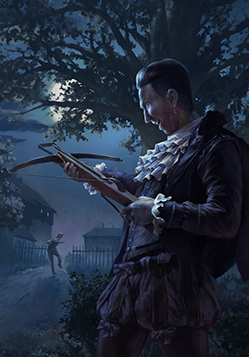