Ulrich
Human, Knight, Firesworn
Intimidate.
Deploy: Spawn and play a base copy of a bronze Firesworn unit from your hand.
Devotion: Boost it by 2.

Intimidate: Boost self by 1 or the specified amount whenever you play a Crime card.
Deploy: Trigger this ability when played.
Spawn: Add a card to the game.
Devotion: Trigger this ability if your starting deck has no neutral cards.
Audio
When the Order was disbanded, those who didn't join the witch hunters formed the Fallen Knights, of which Ulrich became the Grand Master.
Export
Game version 10.11.0
2020-06-30 7.0.0 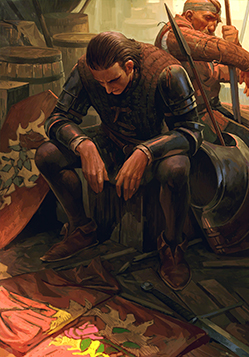