Madoc
Witcher
Whenever you play a Bomb card, Summon this card from your deck or graveyard to random allied row.
Order: Spawn Cataclysm for 1 turn on the opposite row, then destroy self.

Summon: Move automatically to the battlefield (not considered played).
Order: An ability triggered manually by the player. Cards with Order cannot be used for 1 turn after being placed on the battlefield.
Spawn: Add a card to the game.
Cataclysm: At the start of the owner's turn, split 3 damage randomly between units in this row.
In a flash, Madoc pulled out a leathery orb with a fuse, ignited it with a snap of his fingers, and tossed it at the feet of the caterwauling behemoth.
Export
Game version 10.5.0
2021-01-18 8.1.0 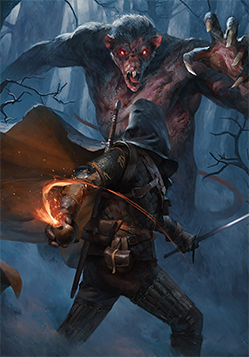