Saskia: Commander
Dragon
Immunity.
Deploy: If you have at least 10 different primary categories in your starting deck, Summon a random bronze Scoia'tael unit with a primary category that is not on your side of the battlefield from your deck to this row.
Timer 3: Repeat the Deploy ability and reset the Timer.

Immunity: Status whereby this card cannot be manually targeted.
Deploy: Trigger this ability when played.
Summon: Move automatically to the battlefield (not considered played).
Timer: Before the end of your turn, lower the number by 1. When the number reaches 0, trigger the ability.
Audio
We won't be fighting mere minions, but their King! And the King himself will have to recognize our victory! Could a soldier dream of better than defeating a monarch?
Export
Game version 10.5.0
2021-12-07 9.6.0 2022-05-10 10.5.0 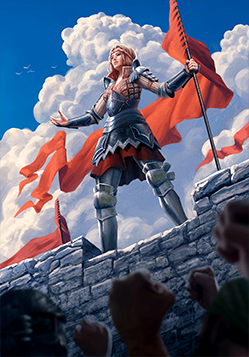