King Radovid V
Human, Soldier
Deploy: If the base version of your leader ability has more than 1 Charge, give it an additional Charge.
Order: Repeat the Deploy ability.

Deploy: Trigger this ability when played.
Charge: The number of times an Order ability can be used. Only cards with Charge: X can gain additional Charges.
Order: An ability triggered manually by the player. Cards with Order cannot be used for 1 turn after being placed on the battlefield.
Audio
“They say it’s the game of kings. That chess teaches one to think strategically. What a load of rubbish! Both sides have identical pieces, the rules stay invariably the same. How does that mirror real life?”
Export
Game version 10.8.0
2021-12-07 9.6.0 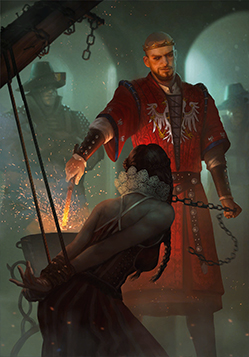