King of Beggars
Human, Blindeyes
Fee 1: Boost self by 1.
While in deck, whenever you pay a Tribute, remove a Counter for each Coin paid. For each removed Counter, gain 1 Coin back.
When the Counter reaches 0, Summon self from the deck to a random allied row.
Counter: 12

Fee: Trigger this ability by spending the specified number of Coins.
Tribute: On Deploy, you may choose to spend the specified amount of Coins to trigger this ability.
Coin: The Novigradian underworld's currency of choice for paying Fees and Tributes. You may possess a maximum of 9 Coins. Your Coin-count is reduced by half (rounded down) when carried over into the next round.
Summon: Move automatically to the battlefield (not considered played).
Audio
You say tribute, I say taxes. ⁠— Francis Bedlam
Export
Game version 10.11.0
2021-12-07 9.6.0 2022-01-13 10.1.0 2022-02-08 10.2.0 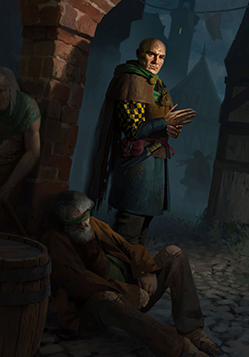