Profit: Gain a specified number of Coins when this card is played. You may possess a maximum of 9 Coins.
Deploy: Trigger this ability when played.
Spawn: Add a card to the game.
Fee: Trigger this ability by spending the specified number of Coins.
Summon: Move automatically to the battlefield (not considered played).
Cooldown: The number of turns before an Order or Fee ability can be reused.
Audio
Behind the Hierarch's pious pageant, his luxurious silks and exotic wines, his whores and slaves, beneath all that lust, greed, and vanity, stands an honorable man.
Export
Game version 10.11.0
2021-12-07 9.6.0 2022-03-08 10.3.0 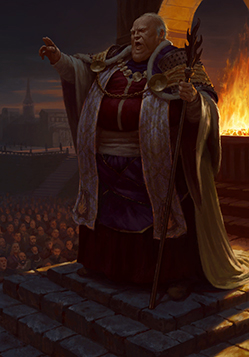