Raffard’s Vengeance
Machine, Mage, Siege Engine
Order: Play a bronze unit from your hand, then draw a card.
Cooldown: 5
Crew: Whenever you play a unit next to this card, damage a random enemy unit by 2.
Mages contribute to this card's Crew ability.

Order: An ability triggered manually by the player. Cards with Order cannot be used for 1 turn after being placed on the battlefield.
Cooldown: The number of turns before an Order or Fee ability can be reused.
Crew: Trigger this ability if this unit is between two Soldiers.
Audio
Step 1. Lock the long arm lever to the hook trigger, and place the load into the sling harness.
Step 2. Set the counterweight to no less than eighty times the load, and line the glide track with pyrite.
Step 3. Conjure and align the portal to target location, and unleash hell.
Export
Game version 9.4.0
2021-10-05 9.4.0 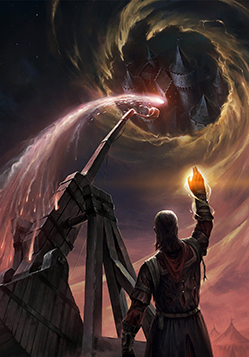