Deploy: Trigger this ability when played.
Bleeding: Status that damages the unit by 1 at the end of its turn. Note: Bleeding turns can accumulate, 1 turn of Bleeding cancels out 1 turn of Vitality. Bleeding ignores armor.
Devotion: Trigger this ability if your starting deck has no neutral cards.
Audio
No one, not even among the higher vampires, knows exactly how old the Unseen Elder is. They only know they should never, under any circumstances, defy his will.
Export
Game version 10.11.0
2021-03-09 8.3.0 2021-05-06 8.5.0 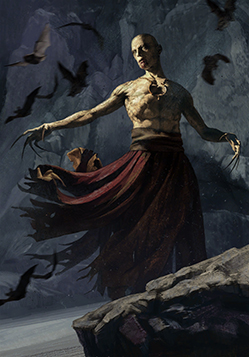