Cerys: Fearless
Human, Warrior
After you've dealt damage to allied units 9 times, Summon self from your deck to your Ranged row.
Zeal. Order: Fully Heal an allied unit and damage another allied unit by the amount Healed.
Cooldown: 1

Summon: Move automatically to the battlefield (not considered played).
Ranged: This ability can only be used while on the ranged row.
Zeal: An Order ability can be used on the same turn the card is placed on the battlefield.
Order: An ability triggered manually by the player. Cards with Order cannot be used for 1 turn after being placed on the battlefield.
Heal: If a unit's current power is lower than its base power, restore it either to base power or by the amount specified.
Cooldown: The number of turns before an Order or Fee ability can be reused.
“If you want something done, send your best man. If you want something done right, send a woman.”
Export
Game version 10.5.0
2021-12-07 9.6.0 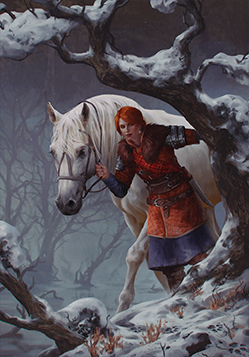