Milva: Sharpshooter
Human
Zeal. Order: Damage an enemy unit by 1.
Deathblow: Shuffle self back to your deck.
Whenever you move an enemy unit, Summon self from your deck to the opposite row, then damage it by 1.

Zeal: An Order ability can be used on the same turn the card is placed on the battlefield.
Order: An ability triggered manually by the player. Cards with Order cannot be used for 1 turn after being placed on the battlefield.
Deathblow: Trigger this ability if this card destroys a unit.
Summon: Move automatically to the battlefield (not considered played).
Audio
Rarely did Milva hunt beasts larger than red deer or armor-clad men.
Export
Game version 10.5.0
2021-12-07 9.6.0 2022-01-13 10.1.0 2022-03-08 10.3.0 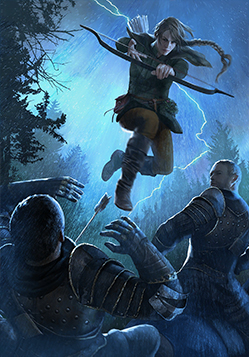