Dettlaff van der Eretein
Vampire
Deploy: Spawn Blood Moon on an enemy row for 2 turns. Increase the duration by 1 for every adjacent Vampire.
Order: Damage an enemy unit with Bleeding by 1.
Deathblow: Spawn an Ekimmara on this row.
Cooldown: 1 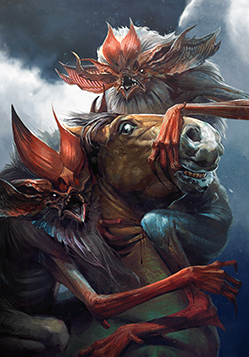 Deploy: Trigger this ability when played.
Spawn: Add a card to the game.
Blood Moon: At the start of the owner's turn, give a random unit in this row Bleeding (2). If the unit is already Bleeding, damage it by 2 instead.
Order: An ability triggered manually by the player. Cards with Order cannot be used for 1 turn after being placed on the battlefield.
Bleeding: Status that damages the unit by 1 at the end of its turn. Note: Bleeding turns can accumulate, 1 turn of Bleeding cancels out 1 turn of Vitality. Bleeding ignores armor.
Deathblow: Trigger this ability if this card destroys a unit.
Cooldown: The number of turns before an Order or Fee ability can be reused.
Audio
He did not love like a man, but like an animal. Madly, deeply, unconditionally. Wildly.
Export
Game version 10.11.0
2021-03-09 8.3.0 2021-05-06 8.5.0 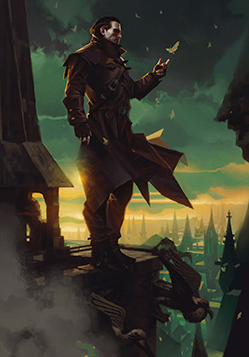