Formation: If played on the melee row, gain Zeal. If played on the ranged row, boost self by 1.
Order: An ability triggered manually by the player. Cards with Order cannot be used for 1 turn after being placed on the battlefield.
Inspired: Trigger this ability if this unit's current power is higher than its base power.
Duel: Units take turns dealing damage equal to their power until one of them is destroyed.
Audio
Your presence at this tourney is an affront to my honor!
Export
Game version 10.6.0
2019-03-28 2.0.0 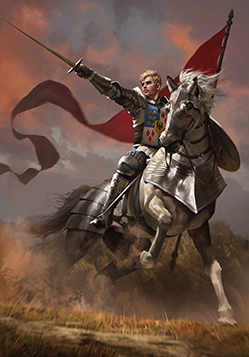