Regis: Reborn
Vampire
Deploy: Drain an enemy unit by 3.
At the end of your turn, while in hand or deck, if there is an enemy unit with Bleeding, increase own base power by 1.

Deploy: Trigger this ability when played.
Drain: Damage ignoring the target's armor, then boost self by the damage dealt.
Bleeding: Status that damages the unit by 1 at the end of its turn. Note: Bleeding turns can accumulate, 1 turn of Bleeding cancels out 1 turn of Vitality. Bleeding ignores armor.
Audio
“You surround your dead with veneration, you dream of immortality, and in your myths and legends someone is always being resurrected—conquering death itself. But were your revered late great-grandfather to spring from his grave and order a beer, hysteria would surely ensue.”
Export
Game version 10.11.0
2021-12-07 9.6.0 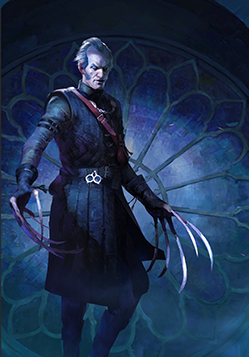