Vial of Forbidden Knowledge
Zeal. Order: Boost an allied unit by 4 and give it Vitality (4).
At the start of the game, if both players have this card in their deck, Summon self to a random allied row and transform. 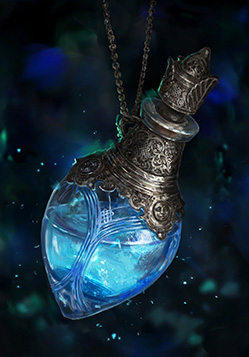 Zeal: An Order ability can be used on the same turn the card is placed on the battlefield.
Order: An ability triggered manually by the player. Cards with Order cannot be used for 1 turn after being placed on the battlefield.
Vitality: Status that boosts this unit by 1 on its turn end. Note: Vitality turns can accumulate; 1 turn of Vitality cancels out 1 turn of Bleeding.
Summon: Move automatically to the battlefield (not considered played).
A single globule of the magical liquid can turn a simpleton into a savant.
Export
Game version 10.9.1
2022-04-05 10.4.0